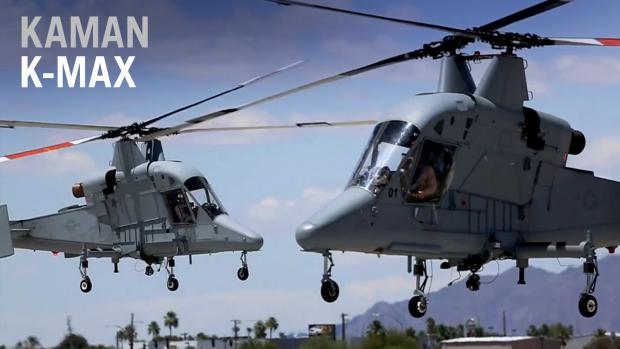 The K-Max is a heavy hauler in the sky, starting life back in 1994 as a logging helicopter and carrying up to 6,000 lb (2,722 kg) of cargo on the end of a cable and cargo hook. Its design is all about efficient lift; instead of a tail rotor, it rocks two large top rotors side by side, each counteracting the other's torque, timed to miss each other as they spin like the blades of an egg beater. The small cabin seats one, and it's designed to automate as much as possible, so the pilot can keep their hands and feet on the controls at all times.

Crew requirements are minimum – one pilot, one mechanic – but with the Titan system in place, you won't even be needing the former. Unmanned operations can keep pilots out of danger in risky environments, like firefighting situations, difficult locations and poor weather. They can keep the chopper in the air longer, running repetitive routes at all hours, and it stands to reason there's money to be saved on personnel costs as well.

"We are excited to reach this major milestone on K-MAX TITAN™," said Roger Wassmuth, Senior Director of Business Development for Kaman's Air Vehicles division. "Watching this capability take to the skies and knowing that we are going to solve some of the toughest challenges for our commercial and military customers."

With more than a thousand unmanned missions flown in military deployment, Kaman's system is certainly well-tested. The US Marine Corps, for its part, is looking to push its two K-Max choppers further, adding the ability to operate fully autonomously with the addition of a sensor-based self-piloting suite from Near Earth Autonomy. Testing on that platform is expected to start in the next couple of months.