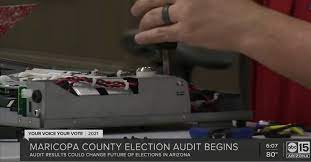 Judge Daniel Martin will be taking over the case after Maricopa County Superior Court Judge Christopher Coury, a Republican appointee, recused himself from the legal challenge on April 25.

Martin, who was appointed to the bench in 2007 by Democratic Gov. Janet Napolitano, is currently assigned to the civil division after having previously been assigned to the family, criminal, and juvenile court departments.

According to Martin's Superior Court biography, he formerly worked as an associate at the law firm Brown & Bain—which merged with Perkins Coie—a leading pro-Democrat law firm—in 2004, after Martin's time at the firm. Election attorney Marc Elias is a partner at that law firm, chair of Perkins Coie's Political Law Group, and one of the Democratic Party's top lawyers.

Elias previously suggested in a Twitter post that the Arizona GOP may receive "sanctions" for a prior lawsuit that sought a hand count audit in Maricopa County.

The announcement comes after Coury recused himself when he learned that attorney Chris Viskovic, with whom he had a prior working relationship, had joined the case.

According to a copy of the recusal first obtained by 12 News, the court received filings at 4 p.m. on April 25 that included names of new attorneys, including Viskovic, who worked at the office of Coury "as an extern within the past five years."