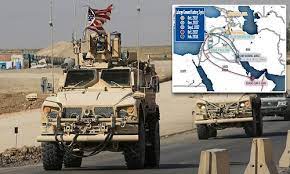 Such data sets surfaced in 2016 when PlanetRisk, a US defense contractor, was working on a software prototype to monitor the travel of refugees

At the time, employees of the company discovered that they were able to track US military operations through data from the apps on soldiers' phones

While the data sets don't contain the names of the soldiers, it does depict their movements, which could reveal clues about an individual's identity

In some cases, devices appeared at bases like Fort Bragg in North Carolina