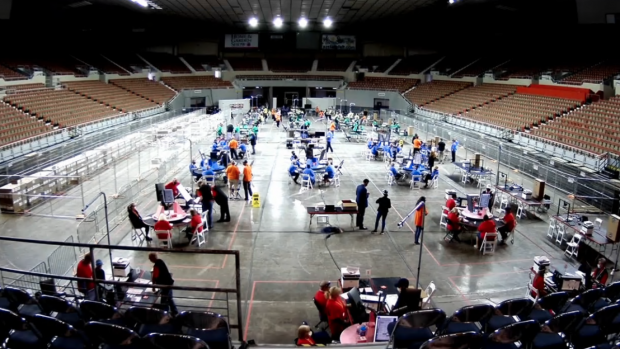 Maricopa County Superior Court Judge Christopher Coury on Friday ordered a halt to the process through at least noon Monday. He said there were sufficient questions raised about the procedures being used by Cyber Ninjas, the Florida firm hired by the Senate to do the work, and whether they complied with state law.

But Coury made his order contingent on the Arizona Democratic Party posting a $1 million bond. That would compensate Cyber Ninjas should they need to hire additional help to make up for lost time.

After the hearing, however, attorney Roopali Desai, who represents the party, said her client won't be putting up the cash. She said the amount sought by the judge to cover the cost of the delay of a few days has no bearing on a project that, according to the Senate, was supposed to cost just $150,000.

And then, Desai said, Cyber Ninjas is "not trustworthy." She said there is nothing to prevent the company from claiming it needed the entire $1 million for compensation.

"It's a huge risk for the party to take," she said.

But Desai said Friday's hearing was not a loss or a waste of time.

She pointed out that, separate from the question of halting the work, Coury did order the company to comply with all election laws. More to the point, the judge wants to see copies of all of their procedures, including hiring and training, to ensure that the ballots and the election equipment now at Veterans Memorial Coliseum are protected.