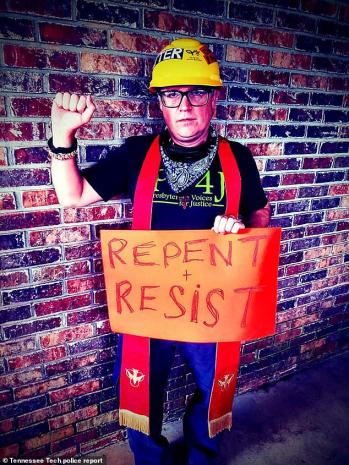 A Tennessee Tech University professor has been branded a 'racist' in fliers posted around campus allegedly by his fellow colleagues for serving as an adviser to Turning Point USA.

The fliers include a picture of Andrew Donadio, who serves as an adviser for the conservative student organization's chapter, while telling him and the students he leads they 'are not welcome' on campus.

The fliers call out the Turning Point USA for starting the website Professor Watchlist - which was created 'to expose and document college professors who discriminate against conservative students and advance leftist propaganda in the classroom,' according to its website.

'This racist college professor thought it would be a great idea to help start a Tennessee Tech chapter for this national hate group, where racist students can unite to harass, threaten, intimidate, and terrorize persons of color, feminists, liberals, and the like, especially their teachers,' the flier reads.