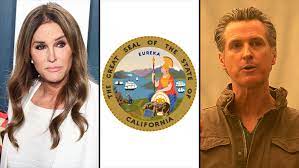 The schlub is basically the leader of the Three Stooges wing of the International Communist Party. Apparently replacing him will be a two-stage process: first, an election to determine if he's going to lose his job, second, another election to choose who will replace him. Assuming there's any reason to believe in elections any more.

The most interesting thing about this situation is that Jenner, as you are probably aware, is a transgender person who started out life as a male, but, after becoming an Olympic champion, decided to become a female, instead. The splendid irony here is that transgenders are currently considered the most precious, sacred, politically-correct entities in the known galaxy by Democrats. The "woke" left just adores them, and they can do no wrong.

Nevertheless, Jenner will not receive the support of the LBGTQRSTUV "community" despite everything that she has done, all that she has given, to raise this group to an unprecedented (and largely undeserved) level of prominence and respectability, for the silliest of all possible reasons. These paragons of openness, kindness, and inclusivity are denouncing Jenner because she's running as a (gasp!) Republican. As Rush Limbaugh once said of Donald Trump, he could have found a cure for cancer, but the left would have attacked him for costing thousands of oncologists their jobs.