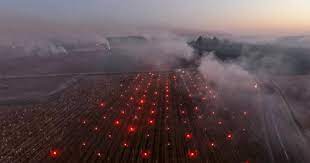 In early April, French farmers scrambled to light-controlled fires across their vineyards to stave off frost. Euronews document these efforts in a series of stunning photographs.

A farmer burns a bale of straw in his vineyard to protect grapevines from frost. This picture was taken on April 7 at the heart of the Vouvray vineyard in Touraine, France.

As reported by The Guardian, the French government declared the frost an "agricultural disaster" and planned to provide financial support to farmers.

Several thousand hectares of farming land, including Bordeaux, Burgundy, Champagne, and the Rhône Valley, were heavily impacted by the frost.

Jérôme Despey, the secretary-general of the FNSEA farming union, said this year's frost could be one of the worst in decades. He said it might be more damaging than the ones experienced in 1991, 1997, and 2003.