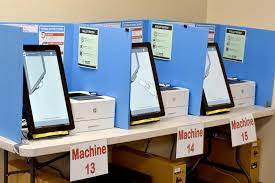 The software is opaque, no one can check it. We're told the machines are not connected to the internet but they are. The Democrats were worried about the electronic voting machines a year ago but now, it's just a conspiracy theory. US intelligence agencies say that cyber attacks from foreign entities are happening regularly. In Dr Franks analysis of Ohio (a state thought to be okay) there was an improbable 100% registration in all 88 counties, and the same voting proportions in each age bracket in every single county.  In other news, it looks like poll workers may have had phones built by a Chinese electronics company that acted as a wifi hot spots sending messages back to China.

"Proves we had foreign interference in our election".

It's history in the making — the highest stakes, most aggressive political battle since the cold war, but this time the US is losing. Things can still be turned around, but will they?

In January, every day the media rang Mike Lindell right up until Feb 5th when his video with the evidence  AbsoluteProof came out. Then the phones stopped ringing. They wanted the evidence but when it came it was banned by Vimeo, Youtube, and when 50,000 people a minute were coming in, Facebook put a big sign over the footage, saying it contained "nudity and profanity".