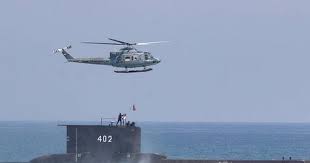 4/22/21
translated into English
An alarm has been sounded in Indonesia and the country's navy following reports that an oil spill has been located near the area where the KRI Nanggala 402 submarine was lost, a case that has clearly been on the military leadership for hours.

According to the Ministry of Defense, around 7, local time, a helicopter that participated in the search located an oil slick at the point where the submarine had sunk off Bali, something that has caused concern in Indonesia, as it may be connected to the lost submarine.
The Indonesian submarine was located at a depth of 800 meters.

Given the appearance of an oil spill at the search point and the maximum allowable diving depth of 300-350 meters for Type 209 submarines, the chances of finding live crew members tend to be zero.

The background
Earlier, the Navy announced that it was looking for a submarine, with a 53-member crew, with which it lost contact early this morning, after participating in exercises, in the offshore zone off Bali.

The KRI Nanggala 402 submarine was located at a depth of 700 meters, in the north of the island, according to the commander of the armed forces, Hadji Jajado.