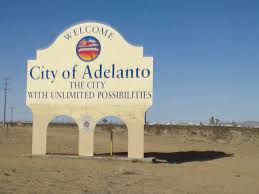 Adelanto is a town of 37,000 where the mayor, Gabriel Reyes, works part time and the city manager, Jessie Flores, is the full time chief executive of the city, according to a recent Bloomberg report.

The county supervisor mentioned to Flores recently that Musk's Boring Company was looking for a place to practice digging tunnels, so Flores reached out. "Steve, we're the ones you're looking for. When can we meet?," Flores texted Boring's President Steve Davis. Flores suggested meeting at SpaceX's headquarters, which was about 2 hours away from Adelanto.

While the city has "no money or political capital", it did have plenty of dirt, open space and lax views on regulation.

"I inherited a very unstable and mismanaged city, and poorly led. If you want to quote me on that, that would be great," Flores said. He took over as city manager in 2018. The city is projecting a $4.72 million deficit for 2021 and 33% of its residents live below the poverty line. It doesn't have its own police department, after it was disbanded in 2001 after a corruption probe.

Permits can get same-day turnaround in the city, Flores said. "They understand that it's economic development and job creation that stimulate the economy, not government bureaucracy," he continued.