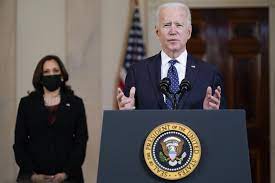 Biden spoke from the White House hours after the verdict alongside Vice President Kamala Harris, with the pair saying the country's work is far from finished with the verdict.

Biden and Harris called on Congress to act swiftly to address policing reform, including by approving a bill named for Floyd, who died with his neck under Chauvin's knee last May. Beyond that, the president said, the entire country must confront hatred to "change hearts and minds as well as laws and policies."

"'I can't breathe.' Those were George Floyd's last words," Biden said. "We can't let those words die with him. We have to keep hearing those words. We must not turn away. We can't turn away."

Harris, the first Black woman to serve as vice president, said racism was keeping the country from fulfilling its founding promise of "liberty and justice for all."