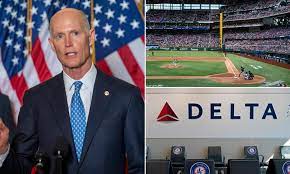 Both corporations came out against Georgia's GOP-backed election overhaul

MLB relocated All-Star Game from Atlanta to Denver, Colorado in protest of law

The Republican from Florida penned an open letter on Tuesday warning corporations including Major League Baseball and Delta Air Lines would face a 'massive backlash' from more conservative US states for opposing the GOP-backed changes.

Scott specifically mentioned Delta and MLB over their stance, with the latter relocating the All-Star Game from Truist Park in Atlanta to Denver, Colorado in protest.

'You know that the Georgia law actually expands early voting and does nothing to suppress or curtail the voting rights of anyone,' according to Scott.