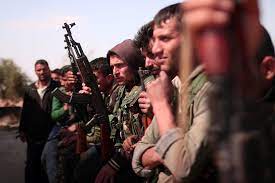 "As a result... two shelters, up to 200 militants, 24 pickup trucks with heavy machine guns, as well as about 500 kilograms of ammunition and components for making improvised explosive devices were destroyed," Karpov said.

During a press briefing, he noted that Russian forces received information that "militants set up a camouflaged base northeast of Palmyra, where combat groups were formed to send and carry out terrorist attacks in various regions of the country, as well as the manufacture of improvised explosive devices was set up."

Karpov added that after the location of these objects had been confirmed, air strikes had been inflicted on them by Russian Aerospace Forces.

According to him, "illegal armed groups have planned terrorist attacks and attacks on government agencies in large cities in order to destabilize the situation in the country ahead of the presidential election," scheduled for 26 May.