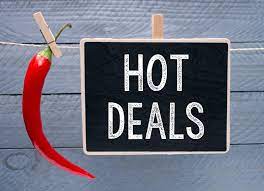 Canadian National plans to offer $325 for each Kansas City Southern share Tuesday, including $200 a share in cash and 1.059 Canadian National shares, the people said. Shares of KSU surged 20% on the news, as the Canadian National offer represents a 20% premium over the previous offer made by Canadian Pacific.

According to WSJ's sources, Canadian National believes a combined firm would generate incremental cash flow—in the form of earnings before interest, taxes, depreciation and amortization—of around $1 billion.

Canadian Pacific, meanwhile, offered shareholders $90 and 0.489 share of Canadian Pacific stock for each share of Kansas City Southern, which would give KC Southern shareholders 25% ownership of Canadian Pacific's outstanding stock.Their formula values KC Southern stock at $275 a share, a 23% premium from Friday's closing price. Under those terms, the Canadian railroad also said it would assume $3.8 billion in outstanding Kansas City Southern debt. The companies said the transaction has an enterprise value of roughly $29 billion.