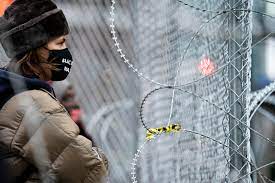 Snow flurries blew around them. A few steps away at the Iron Door Pub, three more National Guard soldiers and a Minneapolis police officer stood out front, watching the street. A handful of other soldiers were scattered nearby, along with four camouflaged Humvees and a couple police cars.

Across the street was a boarded-up building spray-painted with big yellow letters: "BLACK LIVES MATTER ALL YEAR ROUND."

Adam Martinez was walking down the street when he briefly stopped to stare at the scene.

"This city feels like it's occupied by the military," said Martinez, a commercial painter who lives in nearby St. Paul. "This is so weird."

More than 3,000 National Guard soldiers, along with police officers, state police, sheriffs deputies and other law enforcement personnel have flooded the city in recent days, with a verdict looming in the trial of Derek Chauvin, the former police officer charged with murder in the death last year of George Floyd.