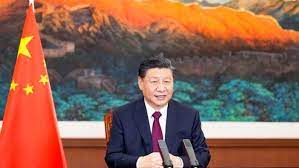 Chinese President Xi Jinping on Tuesday issued some aggressive remarks clearly aimed at Washington, but without naming the United States directly, in his keynote address at the Boao Forum on Asia. His emphasis was to warn against the "unilateralism of a few countries" who are prone to "bossing others around" - which can be resisted via greater global economic integration and avoiding the temptation of decoupling.

He spelled out that that countries that "boss others around or meddle in others' internal affairs would not get any support," and that efforts to "erect walls" or "decouple" stand against market principles. This veiled swipe against the US included the words: "openness and integration is an unstoppable trend, any effort to build barriers and decouple works against economic and market principles, and would only harm others without benefiting oneself."

While there's plenty of regional and border countries, not to mention African populations, that would strongly disagree, XI asserted that "China will never seek hegemony, expansion, or a sphere of influence no matter how strong it may grow," according to a state media transcript.