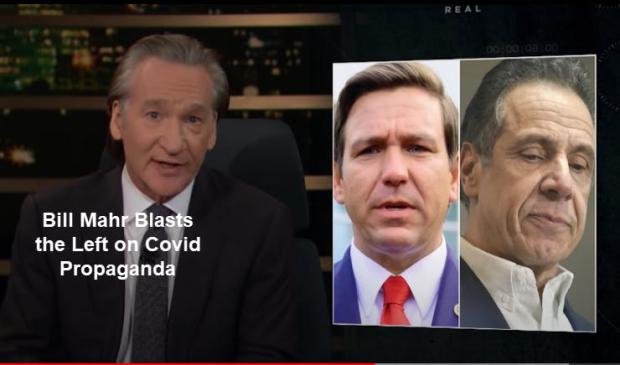 (Natural News) It would appear as though media personality Bill Maher is growing increasingly conservative following statements he made on his show that condemned "blue" states for their failure to put an end to the Wuhan coronavirus (Covid-19) plandemic.

According to Maher, "red" states like Florida and Texas have done a much better job dealing with the scourge than "blue" states like California and New York, both of which still have statewide mask mandates and other draconian measures in place.

Maher blames the media for overreacting to everything and scaring the public, mostly in "blue" states." Meanwhile, "red" states are moving closer to "normal," even if some of their cities and counties are still requiring that people wear masks.

"When researchers at Dartmouth built a database recently monitoring the COVID coverage of the major news outlets across the world, and found that, while other countries mix the good news in with the bad, the U.S. national media reported almost 90 percent bad news," Maher stated, condemning the American media.

"Even as things were getting better, the reporting remained negative."

Maher also took aim at the right-leaning media for reporting misinformation as well, but focused much of his attention on the left-leaning media, which would seem to want the plandemic to continue forever.

Citing a recent Gallup poll, Maher noted that Democrats are far and away the most ill-informed when it comes to the facts about the Chinese virus. While only one out of five, or 20 percent, of people who test positive for the Wuhan flu end up having to be hospitalized, the average Democrat believes that figure to be over 50 percent.