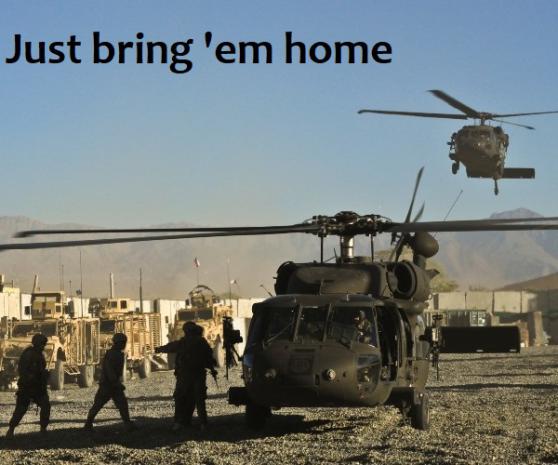 Last week President Biden announced a "full" US withdrawal from Afghanistan – the longest war in US history – by the 20th anniversary of the 9/11 attack on the United States. While this announcement is to be welcomed, the delayed US withdrawal may result in Americans and Afghans dying needlessly for good PR optics back home. We all remember how many Americans died after President Bush's "Mission Accomplished" stunt in Iraq.

The war has been a disaster from day one. So why wait to end it?

The previous Trump Administration had negotiated an agreement for the US to be out of Afghanistan by the first of May, but in its obsession with tossing out anything associated with Trump, President Biden will continue to keep US troops in harm's way in this pointless war.

The Taliban have kept their end of the "Doha Agreement" signed under then-President Trump: no Americans have been killed in Afghanistan for more than a year. However, the US side under President Biden will formally violate the Agreement by keeping US troops in-country after May 1st. The Taliban has announced that it will hold the US "liable" for remaining in-country after the agreed-upon departure date. That means more Americans may be killed.

The outcome of the war will not be altered in the slightest by keeping US troops in Afghanistan four additional months. The withdrawal is already announced and no one paying attention expects the corrupt US-backed Kabul government to survive. It is another Saigon moment, proving that the intellectually bankrupt US foreign policy and military established has learned absolutely nothing from history. So if another American is killed, who is going to explain to the grieving family why their loved one had to remain in harm's way for a good 9/11 photo-op?