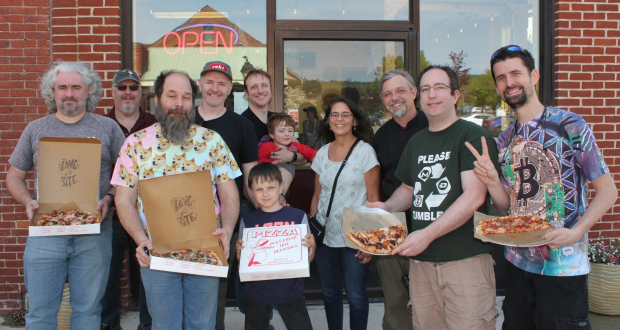 First of all, if you haven't seen the raid videos from March 16th, 2021 where the FBI raided the Liberty Radio Network studio, Free Talk Live, the Bitcoin Embassy, & the Mighty Moose Mart check that out first, and then come back here when your done.

If you have it's time to start writing. Your friends and fellow activists need you and your support during this troubling time. Oppressive thugs collectively identifying themselves as the state (federal government) have decided to take it upon themselves to use the violence of the state to achieve social and political goals that are directly diametrical to the values our community hold dear.

The state has kidnapped and caged members of our community. People who have been working for peace for years and turning this community into what it has become. The FBI and a half dozen other federal and local agencies raided and arrested our friends over the semblance of Bitcoin being illegal. In March our friends were arrested and two have been denied bail or otherwise not received bail hearings.

As insane as it might sound for a man looking forward to his day in court after more than 5 years of spreading the message of crypto a magistrate judge ruled on March 29th that Ian Freeman posed a flight risk and lacked ties to the community. On that notion she ruled he would remain behind bars until the conclusion of the trial.

In the case of Nobody there is still a chance of release, but efforts to obtain a proper lawyer have been slow. Between the need to raise over $200,000 (initial amount needed to get started) and numerous members of our community coming down sick this past week or so these particular things have been very slow to materialize. The good news is that 4 out of the crypto 6 have obtained lawyers. While we work to retain lawyers for everybody else (see TheCrypto6.com to help with the fundraising effort) these guys would love to hear from you.

Currently Ian Freeman and Nobody are being held at the Merrimack County jail. Each is being held separately and what one receives or is aware of the other may not be. So please do write to each individually and let them how much you value their commitment to peace and liberty.

No inmate number is required, just the inmates name (Nobody and Ian Freeman) at the jail's address. Things to note: No crayon, altered paper, laminated paper, polaroids, staples, or paper clips are allowed and your mail may get rejected if any of this is true. We recommend typing your letter or writing with a black or blue pen to avoid having your mail being returned. What constitutes crayon may include colored pencil.

Be sure to number your correspondence with "Letter number #" at the top of each page as well as page # like this "Letter number 2 Page 3 of 6" so that the person you are writing to knows what order letters came in and for that matter if a letter or page doesn't arrive in tact.

As always, assume that everything is going to be read, not all your mail may get received, and any response may not get returned to you.

Getting Your First PirateChain (ARRR)