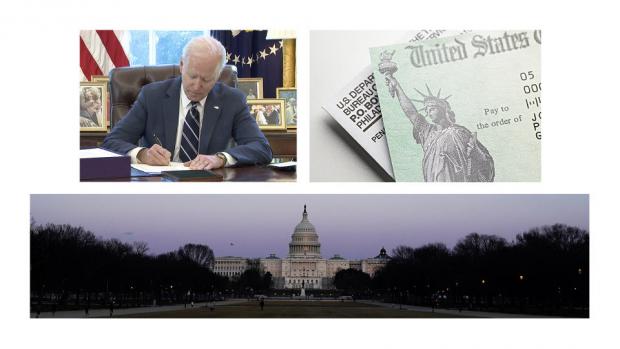 Showdown Over the American Rescue Plan

A last-minute provision added to the $1.9 trillion American Rescue Plan prevents states from using the money directly or indirectly on tax cuts.

The Wall Street Journal reports Five States Filed a Lawsuit against that provision.

Republican lawmakers and attorneys general argued the provision, which would apply for three years, is overly vague, unconstitutional and would unfairly penalize states in good fiscal health. Five states have filed lawsuits seeking an injunction against the provision—the first hearing is scheduled for the end of the month—and Republicans in Congress have introduced legislation to repeal it.

"It is potentially a significant restriction on state fiscal authority, and some of that may come down to the Treasury guidance," said Jared Walczak, vice president of state projects at the conservative-leaning Tax Foundation. "If this became a broad restriction, that raises serious constitutional questions."

One issue is how the federal government defines "indirectly." If states use federal aid to pay teachers and firefighters, for example, then use the savings to lower taxes, that could be considered an indirect tax cut, Mr. Walczak said.

It is unclear how far that logic would extend. Among the questions states have asked: Would policy changes, such as new tax incentives for businesses, be considered indirect tax cuts?

The stipulation effectively says states that accept any money cannot cut any taxes for three years.

Idaho, Utah, Arizona and North Carolina, and West Virginia were weighing tax cuts for the coming fiscal year and now they can't if they accept any stimulus money.