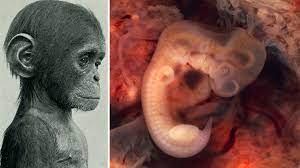 Researchers have grown human stem cells in monkey embryos to try and better understand how the cells communicate.

Some people are totally against this kind of experimentation and think it could lead the way to "human-nonhuman" creatures.

The controversial embryos were made at the Salk Institute in California.

They're scientifically known as monkey-human chimeras.

Human stem cells, known for the ability to become different types of cells, were injected into macaque embryos in a petri dish.

The scientists hope their work could be used to create organs for transplants and teach us more about human development and disease progression.

He also worked on the first human-pig hybrid in 2017.

He said: "These chimeric approaches could be really very useful for advancing biomedical research not just at the very earliest stage of life, but also the latest stage of life."

The human and macaque monkey embryos were monitored for around 20 days and have since been destroyed.