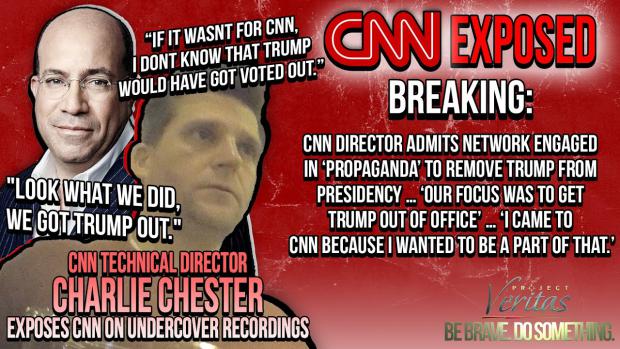 James O'Keefe's Project Veritas has just released new, secretly recorded footage on Tuesday that reveals CNN employees describing how the network worked to support President Joe Biden's campaign during the 2020 presidential election. Mediaite has learned that this is the first in a series.

CNN Technical Director Charlie Chester played the video's starring role. "Our focus was to get Trump out of office, right?" the video shows Chester telling someone off-camera. "Without saying it, that's what it was."

As is the case with videos made from source material captured from hidden cameras, one should approach the final product with a healthy dose of caution. Post-production editing is a dark art that can materially change the meaning and context of many things that seem obvious at first blush. (See Daily Show field segments from the aughts as an example.) But in this instance, there are enough examples of full and complete comments made by Chester that were clearly not crafted out of thin air, or misleading editing tricks.

A source close to CNN tells Mediaite that Chester was targeted by Project Veritas via the dating app Tinder, in which his dating profile included CNN. The unidentified Project Veritas employee claimed to be a nurse, and the two initially bonded over Chester's past health concerns. They went on a total of five dates, the last of which occurred at a coffee shop in Chester's neighborhood, but was interrupted by O'Keefe and others before leaving the coffee shop.

The most damning portion of the video is the opening supercut comprised of footage viewers see later in the video. While many of these comments are cut for time — as is the standard procedure for what is known as a "super tease" — when cut together so quickly it has the desired effect of being much more substantial than comments viewed on their own.

The footage didn't make the identity of Chester's conversational partner clear, though a rack of liquor bottles is clearly pictured behind him in one scene. Alcoholic beverages, including a wine glass and what appeared to be a can of Hop Peak IPA, appear in another.

Chester described his role in one scene as being "one step down from director," though the role of technical director has no input on the content of any programming, and he was almost certainly not included in any editorial calls. Nonetheless, he was gainfully employed by CNN, clearly was observant to on-air programming, and referred to his network's work to defeat former President Donald Trump as "propaganda," but said he believed in the mission.