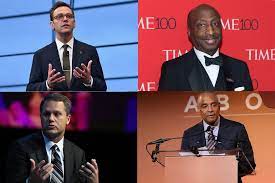 and punish states by pulling investments in factories, stadiums and other projects and endorsements.

According to Axios, the call included "a long list of business luminaries, including James Murdoch, Ken Chenault, Ken Frazier, LinkedIn co-founder Reid Hoffman, Levi Strauss CEO Chip Bergh, Atlanta Falcons owner Arthur Blank, and executives of Delta, United and American Airlines," which expanded on a March initiative by 72 black executives to oppose election legislation in Georgia deemed to suppress the vote (yet nobody can articulate how).

CEO virtue signaling is such a transparent head-fake to keep the progressive mob from attacking them on pay & a lot more -- Median pay for CEOs of more than 300 of the biggest U.S. public companies reached $13.7 million last year. https://t.co/kPiHVjr3Uh

During the call, Kenneth Chenault, the former CEO of American Express, and Kenneth Frazier, the CEO of Merck & Co., asked the leaders to "collectively call for greater voting access," according to the Wall Street Journal.

Chenault and Frazier, two of the most prominent Black business leaders in the US, also reportedly told businesses not to walk away from the voting right issue and requested that CEOs sign a statement "opposing what they view as discriminatory legislation on voting." -Business Insider