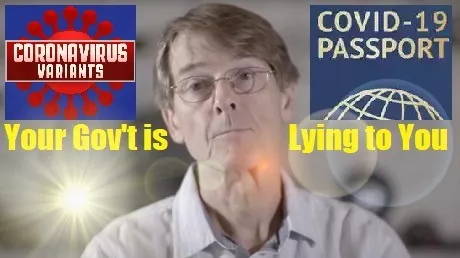 April 7, 2021 (LifeSiteNews) — Dr. Michael Yeadon, Pfizer's former Vice President and Chief Scientist for Allergy & Respiratory who spent 32 years in the industry leading new medicines research and retired from the pharmaceutical giant with "the most senior research position" in his field, spoke with LifeSiteNews.

He addressed the "demonstrably false" propaganda from governments in response to COVID-19, including the "lie" of dangerous variants, the totalitarian potential for "vaccine passports," and the strong possibility we are dealing with a "conspiracy" which could lead to something far beyond the carnage experienced in the wars and massacres of the 20th century.

1. There is "no possibility" current variants of COVID-19 will escape immunity. It is "just a lie."

2. Yet, governments around the world are repeating this lie, indicating that we are witnessing not just "convergent opportunism," but a "conspiracy." Meanwhile media outlets and Big Tech platforms are committed to the same propaganda and the censorship of the truth.

3. Pharmaceutical companies have already begun to develop unneeded "top-up" ("booster") vaccines for the "variants." The companies are planning to manufacture billions of vials, in addition to the current experimental COVID-19 "vaccine" campaign.

4. Regulatory agencies like the U.S. Food and Drug Administration and the European Medicines Agency, have announced that since these "top-up" vaccines will be so similar to the prior injections which were approved for emergency use authorization, drug companies will not be required to "perform any clinical safety studies."

5. Thus, this virtually means that design and implementation of repeated and coerced mRNA vaccines "go from the computer screen of a pharmaceutical company into the arms of hundreds of millions of people, [injecting] some superfluous genetic sequence for which there is absolutely no need or justification."

6. Why are they doing this? Since no benign reason is apparent, the use of vaccine passports along with a "banking reset" could issue in a totalitarianism unlike the world has ever seen. Recalling the evil of Stalin, Mao, and Hitler, "mass depopulation" remains a logical outcome.

7. The fact that this at least could be true means everyone must "fight like crazy to make sure that system never forms."

Dr. Yeadon began identifying himself as merely a "boring guy" who went "to work for a big drug company … listening to the main national broadcast and reading the broad sheet newspapers."

INTERVIEW Catherine Austin Fitts: This is a Slave System Orchestrated by Central Banks

What If The Big Reveal Already Happened?

What If The Big Reveal Already Happened?