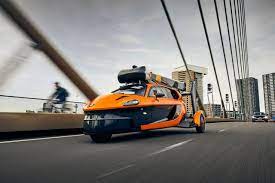 PAL-V has been developing the Liberty for some 20 years. It's a three-wheel car — already certified to ride on European roads — that converts to a gyroplane by folding out its rotors and propellers, which are attached to the roof and back of the car. The company has been flight testing the vehicle since 2012, and expects to achieve flight certification in the next year or two, possibly rolling out the first models for sale sometime in 2022.

Aspen Avionics, a homegrown company that launched in Albuquerque in 2004, builds digital avionics for small commercial and general aviation aircraft. It developed some of the industry's first digital flight displays as drop-in replacements for aging mechanical gauges and controls. Its GPS-backed digital cockpits offer a full suite of real-time data on things like altitude, air speed and weather, plus navigational data to increase a pilot's situational and terrain awareness with photo-quality moving maps and traffic displays.