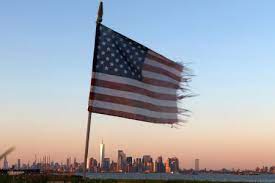 Here are few numbers, we'll start with two: 447 million and 4.67 billion. These two numbers speak volumes, and are in the foundation of the America's decline and increasingly irrational behavior which may, quoting Bachman Turner Overdrive's famous hit, get us to the point of a proverbial ain't seen nothing yet. The first number is a population of European Union, while the second one is a population of Asia. Asia's population constitutes around 60% of all the world's population. Second place in this count is taken by Africa, around 1.37 billion, and the third–by Latin America and Caribbean with respectable 659 million which is considerably larger still than the population of the European Union. The Northern America's population is around 371 million, which in the larger scheme of things doesn't look that impressive. In fact, it isn't.

The history of colonialism—I deliberately omit here this qualifier "Western", there were all kinds of colonialisms—as related to classic capitalism was more than just about exploitation of colonies for the benefit of metropole. While images of extraction of natural resources from colonies and shipping those to metropoles are correct, they do not form a complete picture. In the end, colonies were viewed as markets where metropole would sell its products.