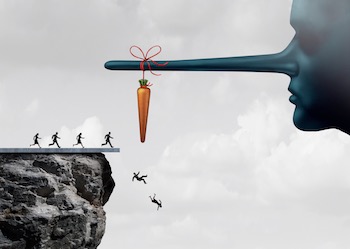 With one very important difference.

Which is – in one form or another – always the same thing: Submission to its (to their) authority.

Which fact ought to call into question the notion that government is altruistic. Such questioning might lead to examination – and exposure – of the real motives behind recent government actions, such as the "locking down" of some businesses  – the small, independently owned ones but not the big corporate ones, for instance.

What might be the self-interest of the government – of the people who constitute the government – in that case? It is doubtful it is to "stop the spread" – since it is probably true that a virus is more spreadable at large retail hubs, where many people congregate in close proximity. The real interest appears to be to conglomerate all commerce into a handful of corporate retail hubs, these being much easier to control as by setting forth common policies, which – absent the counterweight of small, independent retailers – there is no alternative to.