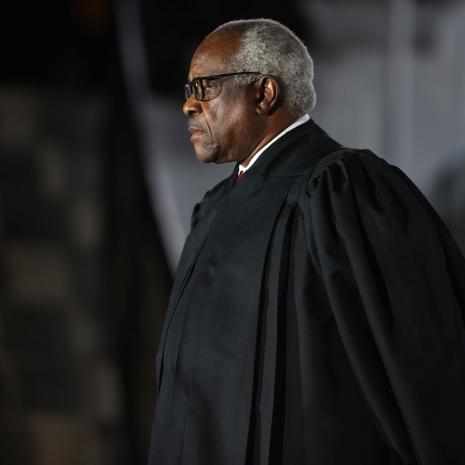 Was Thomas finally laying the groundwork for regulation of Big Tech, which conservatives correctly view as both deeply biased against them and actively biased in favor of left-wing causes?

At first blush, the case primarily concerned First Amendment questions about whether former president Donald Trump (while in office) could block certain individuals or groups from following his Twitter account.1 The Blockees argued that a sitting president should not be able to prevent access to "news" he creates on social media, especially when particular tweets relate to official government business. Yet if Twitter is indeed a constitutionally protected "public forum," how does the company get away with deplatforming the president of the United States?

No clear answers from the court were forthcoming: since Trump is no longer in office, the court remanded the case back to the Second Circuit to dismiss on grounds of mootness. But Thomas took the opportunity to move past any free speech questions and make a much broader case for Congress to radically rewrite regulations for the modern digital space. In his words, the "principal legal difficulty that surrounds digital platforms—namely, applying old doctrines to new digital platforms is rarely straightforward." But in the same concurrence, his language appears to argue simply for the application of existing legal doctrines, namely those surrounding antitrust, common carriers, and public utilities regulation. Thus there is a tension between his view that new thinking is required and his default to statutory or bureaucratic approaches to defeat what he sees as de facto tech monopolies:

The analogy to common carriers is even clearer for digital platforms that have dominant market share. Similar to utilities, today's dominant digital platforms derive much of their value from network size. The Internet, of course, is a network. But these digital platforms are networks within that network. The Facebook suite of apps is valuable largely because 3 billion people use it. Google search—at 90% of the market share—is valuable relative to other search engines because more people use it, creating data that Google's algorithm uses to refine and improve search results. These network effects entrench these companies. Ordinarily, the astronomical profit margins of these platforms—last year, Google brought in $182.5 billion total, $40.3 billion in net income—would induce new entrants into the market. That these companies have no comparable competitors highlights that the industries may have substantial barriers to entry.