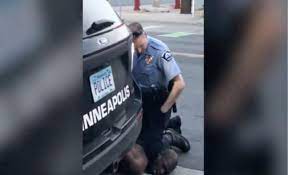 Washington Post: JURORS HAD TO BE TRANQUILIZED TO CONVINCE THEM TO SERVE.

NY Post: 'DON'T EVEN THINK ABOUT PUTTING THIS SH*T ON US,' SAYS CHIEF JUSTICE OF THE SUPREME COURT.

Judge, why did you suddenly cancel the trial after its fifth day, dismiss the jury, and declare Derek Chauvin guilty of murdering George Floyd?

Well, Max, it was obvious to me there were overriding concerns about public safety. You know—burning cities, for example.

The legal community has hailed your ruling a breakthrough precedent.

Were you personally threatened at any point, sir?

No, except for the letter the Minneapolis City Council sent me.

What did the letter state?

The title of the two-page message was: TRIAL? WE DON'T NEED NO STINKIN' TRIAL.