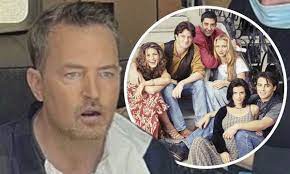 The comic actor, 51, shared a photo on Friday night of himself in an unguarded moment while he had his makeup done professionally in his dressing room

In the caption he wrote: 'Seconds before eating a makeup brush. Not to mention reuniting with my Friends'

Matthew's playful photo confirmed that he and his co-stars were hard at work on the reunion special, which may be why he chose to delete it after a few hours

His picture was also deleted later in the day

It was intended to debut with the arrival of HBO Max, but it had to be delayed due to the pandemic