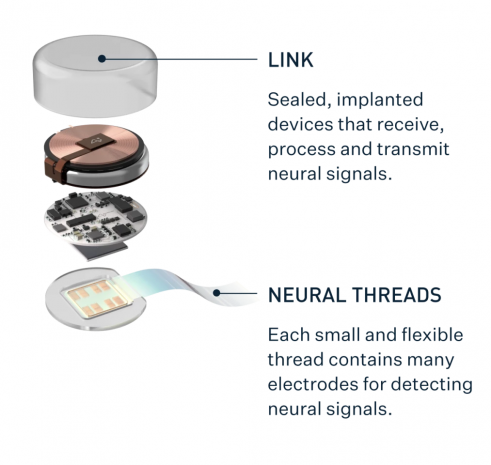 The last time we heard from Neuralink, it had implanted one of its computer chips into the brains of pigs to demonstrate how they can record neural activity as the animals sniff around a pen. These chips consists of arrays of electrodes that record patterns of neuron activity, which can then be decoded and converted into input commands for various devices.

Previous research in this field has shown how these brain-machine interfaces can be used to control drones, prosthetic limbs and computer tablets, just by recording and relaying the user's brain activity that signals their intentions. The most impressive feats, however, have required that these brain implants be tethered to computer systems to provide the necessary bandwidth for the signals to be transmitted.

The goal for Neuralink, and many researchers in the field, is to develop a completely wireless version, which would allow sufferers of paralysis far greater freedom and quality of life. A consortium of scientists working on this problem, known as BrainGate, earlier this week revealed it had developed the first wireless system to transmit neural signals at a similar bandwidth to wired systems. It uses arrays of 200 electrodes to gather the full spectrum of signals from the brain's motor cortex and pass them along to a connected wireless transmitter on the user's head.