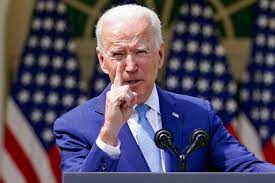 But he said much more is needed. And for Biden, who proposed the most ambitious gun-control agenda of any modern presidential candidate, his limited moves underscored his limited power to act alone on guns with difficult politics impeding legislative action on Capitol Hill.

Biden's new steps include a move to crack down on "ghost guns," homemade firearms that lack serial numbers used to trace them and are often purchased without a background check. He's also moving to tighten regulations on pistol-stabilizing braces like the one used in Boulder, Colorado, in a shooting last month that left 10 dead.

The president's actions delivered on a pledge he made last month to take what he termed immediate "common-sense steps" to address gun violence, after a series of mass shootings drew renewed attention to the issue. His announcement came the same day as yet another episode, this one in South Carolina, where five people were killed.

But his orders stop well short of some of his biggest campaign-trail proposals, including his promise to ban the importation of assault weapons, his embrace of a voluntary gun buyback program and a pledge to provide resources for the Justice Department and FBI to better enforce the nation's current gun laws and track firearms.