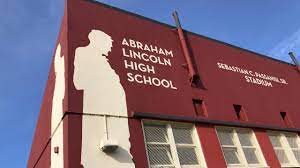 Just over two months after voting to rename 44 schools, the San Francisco school board is poised to reverse that decision Tuesday to avoid costly litigation over the issue.

The upcoming vote represents the latest development in a months-long initiative that culminated amid the pandemic. In late January, the board voted 6-1 to change dozens of school names associated with slavery, oppression, genocide and colonization as public schools districtwide remained closed.

The process began in 2018 with a resolution to create a committee to advise the board. The committee ultimately recommended changing 44 school names, including Lincoln, Washington, Mission and Balboa high schools, as well as Alamo, Jefferson and Serra elementary schools.

Others considered the effort too far-reaching and expensive, with no cost estimate on what it would take to rebrand more than three dozen school sites. Examples across the country put the price tag at somewhere between $20,000 and several million dollars per school, depending on the school's size, signage and other items related to the previous name, like band uniforms.

A civil lawsuit filed in San Francisco Superior Court said the school board's decision violated the Brown Act, the state's open meeting law, given the publicly noticed agenda item said the vote would decide on a list of potential schools to be renamed.