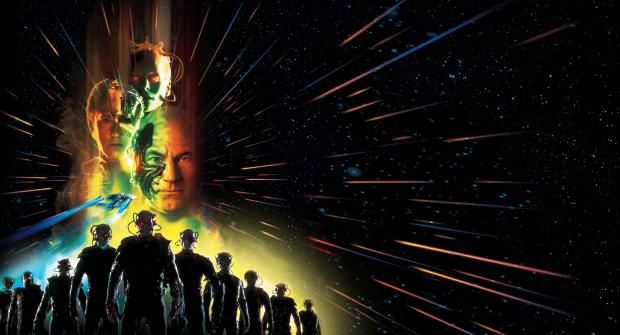 A host of celebrations, festivities and special events are in store on Paramount+ on April 5 — a date known to all "Star Trek" fans as as First Contact Day: the day when humans and Vulcans first met in the movie "Star Trek: First Contact."

If you recall, "Star Trek: First Contact" sends the USS Enterprise-E and her crew through a temporal vortex in an attempt to stop the Borg from preventing the first warp flight by the human race, which subsequently results in the first contact with an alien race (the Vulcans) on April 5, 2063. It's one of the pivotal moments in human history and after that everything begins to change. Following the invention of warp drive, fleets of starships are built and mankind starts exploring the galaxy. It unites humanity in a way no one ever thought possible when they realize they're not alone in the universe; poverty, disease and war, they're all gone within the next 50 years.

Unless of course you live in the Mirror Universe, where inventor of warp drive Zefram Cochrane (James Cromwell) gives the visiting Vulcans both barrels before everyone plunders the alien survey ship.

According to the official blurb, the event will "honor and commemorate this future date by providing 'Star Trek' fans exclusive programming, including themed panels with the cast and creatives from classic and current 'Star Trek' television series and cast from 'Star Trek: First Contact' exclusive news from the 'Star Trek' Universe on Paramount+, curated episode marathons, the return of the #StarTrekUnitedGives initiative and more."