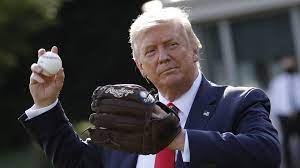 "Boycott baseball and all of the woke companies that are interfering with Free and Fair Elections," Trump wrote. "Are you listening Coke, Delta, and all!"

Over 100 companies joined to condemn the law after it was signed, including Facebook, Google, Bank of America, Apple, Microsoft, Coca-Cola, American Express, Delta, and the Home Depot.

"I have decided that the best way to demonstrate our values as a sport is by relocating this year's All-Star Game and MLB Draft," he wrote in a statement.

Trump said baseball is losing "tremendous numbers" of fans because they are afraid of the radical left.

"[T]hey are afraid of the Radical Left Democrats who do not want voter I.D., which is desperately needed, to have anything to do with our elections," Trump wrote.