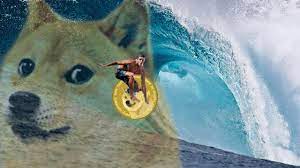 While bitcoin prices have been consolidating just under the $60k handle, a number of other alternative digital assets have seen steep gains. Two coins, in particular, the decentralized storage network filecoin token and the notorious meme token dogecoin have jumped well over 10% during the last 24 hours.

On Thursday, April 1, 2021, otherwise known as "April Fool's Day," the popular cryptocurrency dogecoin (DOGE) jumped over 12% during the last 24 hours. The spike in price was immediately after the famous Tesla executive Elon Musk tweeted:

Dogecoin kind of slumped during the course of March but did very well during the first two months of the year. During the last seven days, DOGE is up 19% against the U.S. dollar and 973% during the last three months. On Wednesday afternoon (EST), dogecoin was exchanging hands for $0.058 per coin.

Meanwhile, filecoin (FIL) has been duking it out with litecoin (LTC) in recent times. FIL is trading for $205 per coin and jumped over 12% on Wednesday. FIL's market cap is around $11.9 billion and filecoin has jumped a massive 151% during the last seven days.