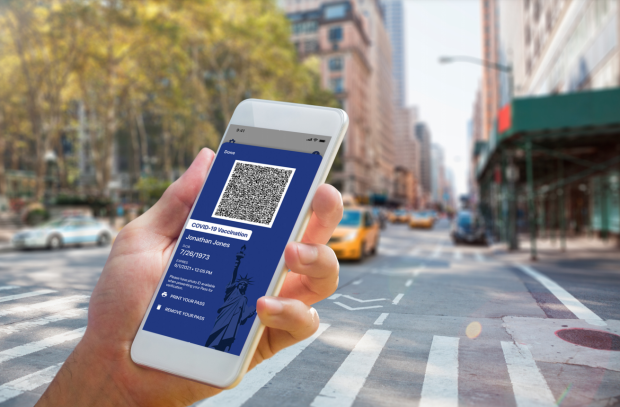 The state had clearly made up its mind already and had people working on the project because the "Excelsior Pass" is already in production and will be required for many social activities starting on April 2nd. Large venues in New York City are already using it, but most other "arts, entertainment and event venues" will require the pass shortly thereafter. People who have either been vaccinated or have received a negative COVID test in the previous few days will be able to obtain the pass, which can either be printed out on paper or displayed via an app on your phone. (New York Post)

The nation's very first "vaccine passport" is coming to the Big Apple.

The program, dubbed the "Excelsior Pass," is an app that will allow New Yorkers to prove their vaccination status, or recent history of a negative COVID-19 test, in order to gain entry to events and businesses, Governor Cuomo announced in a news release Friday.

"Similar to a mobile airline boarding pass, individuals will be able to either print out their pass or store it on their smartphones using the Excelsior Pass Wallet app," the news release explains.

4 Comments in Response to It's official. "Vaccine Passports" are required in New York

In addition, regarding the below comments, when it is adjudicated that travel is a right under the First Amendment (as it already has been, so re-adjudicated), this will mean that nobody will need licenses or car plates any longer. People could make up their own "Right to Travel" cards to show officers who a little behind on the law.

By the way, "no-vaccine Passports would be required for all people in airline and public transportation companies.

If anybody who was vaccinated doesn't like the terms of the below comment, they can sue the State requiring "No-vaccine Passports" on the right to travel which is backed by the First Amendment. When the State loses (voluntarily, sort of), there will be president made that allows people to disregard vaccine passports in States that require them.

Time for South Dakota, Florida and other States, to make a no-vaccine passport mandatory. Anybody entering the State must sign an affidavit that he has not been vaccinated, but if he has been, no entry into the State. A "No-vaccine Passport" will be issued to him, and withdrawn if it is later found that he was lying - with prosecution possible. Those vaccinated people who reside in the State, may not go out in public. After all, the vaccine is rapidly turning people into super-spreaders, and slowly into zombies. ;)