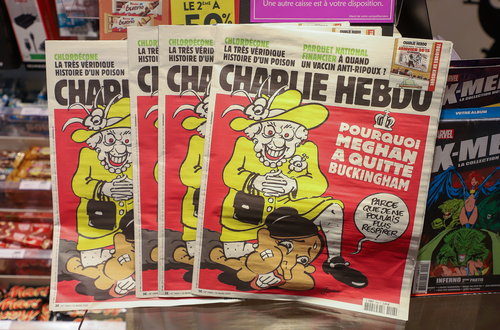 Reactions ranged from "abhorrent" to "hateful" to "wrong on every level," with many offering versions of the now-mandatory observation that the magazine is not only bad now, but "has always been disgusting."

This cover is probably an 8 or 9 on the offensiveness scale, and I laughed. It goes after everyone: Queen Elizabeth, depicted as a more deranged version of Derek Chauvin (the stubby leg hairs are a nice touch); Meghan Markle, the princess living in incomparable luxury whose victimhood has become a global pop-culture fixation; and, most of all, the inevitable chorus of outraged commentators who'll insist they "enjoy good satire as much as the next person" but just can't abide this particular effort that "goes too far," it being just a coincidence that none of these people have laughed since grade school and don't miss it.

Six years ago, after terrorists killed 10 people at Hebdo's Paris offices in a brutal gun attack, the paper's writers, editors, and cartoonists were initially celebrated worldwide as martyrs to the cause of free speech and democratic values. In France alone on January 11, 2015, over 3 million people marched in a show of solidarity with the victims, who'd been killed for drawing pictures of the Prophet Muhammad. Protesters also marched in defiance of those who would shoot people for drawing cartoons, especially since this particular group of killers also fatally shot four people at a kosher supermarket in an anti-Semitic attack. For about five minutes, Je Suis Charlie was a rallying cry around the world.

In an early preview of the West's growing sympathy for eliminating heretics, cracks quickly appeared in the post-massacre defense of Charlie Hebdo. Pope Francis said that if someone "says a curse word against my mother, he can expect a punch." Bill Donohoe, head of the American Catholic League, wrote, "Muslims are right to be angry," and said of Hebdo editor Stephane Charbonnier, "Had he not been so narcissistic, he may still be alive." New York Times columnist and noted humor expert David Brooks wrote an essay, "I Am Not Charlie Hebdo," arguing that although "it's almost always wrong to try to suppress speech," these French miscreants should be excluded from polite society, and consigned to the "kids' table," along with Bill Maher and Ann Coulter.