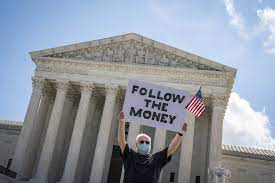 How did the cat get so fat?

When I was a public schoolboy, bright-eyed, we sang the anthem every day.

It's taken years of watching upper-crust decadence and depravity – in the vein of Caligula — to realize the truth: there is no bottom to the barrel. The elites just do what they want and if they decide they want to hurt you, either through malice or indifference or graft, they will.

This is when "defenders of democracy" – increasingly, from the ostensible, self-positioned "left" — will jump in with the well-trodden refrain: "We choose our leaders to represent us – we have a choice!"

You have no meaningful choice. As George Carlin, patron saint of calling out neoliberal bullshit, RIP, put it:

"Americans are led to feel free through the exercise of meaningless choices. There are only two political parties. There is a reduction of the number of media companies. Banking has been reduced to only a handful of banks. Oil companies. These are important, and you're given very little choice…. You know what your freedom of choice in America is? Paper or plastic."