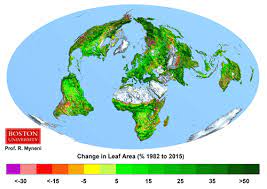 The authors of the latest paper assume the broken climate models work, and then guesstimate what the cost of all that theoretical warming would be with economic models that aren't much better. It's a paywalled paper, but they don't appear to account for all the net benefits of coal, oil and gas which include, keeping people alive and fertilizing forests and fields around the world for free. These aren't guesstimates from the future but known good and great gifts from the last century or two.

Send them the bill: the fossil fuel companies are subsidizing taxpayers

How much is a hundred years of free fertilizer worth?

If only academic institutions were more than Big Gov advertising agencies they might also have considered that fossil fuel companies are never paid for their part in boosting agricultural yields, nor in greening the forests. Some 18 million square kilometers of Earths surface has more biomass. Arid regions of the world are 11% greener, mostly thanks to CO2  and deserts are shrinking. If CO2 actually caused much warming we might even be overrun with cheap soy and corn  and crops could grow another 1,200 kilometers closer to the North Pole.

Cold weather kills 20 times more people than heat. If Kotchen can assume CO2 causes warming (despite the lack of evidence for that), it follows then that it must have saved countless lives. How many more senior citizens would die prematurely if they are forced to pay more for electricity and thus can't afford to turn the heater on in winter? In the UK alone, in one winter there were at least 20,000 more deaths. All over the world, people die more in cooler weather, even in hot Brisbane.