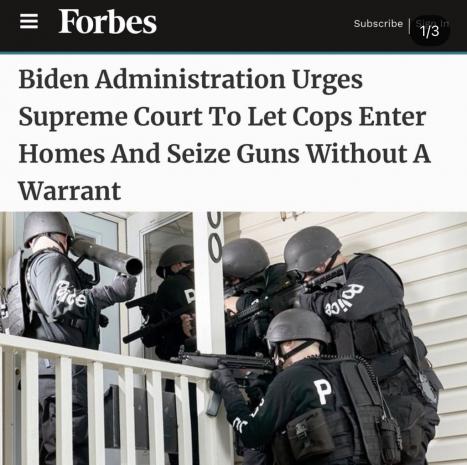 Authored by Nick Sibilla via Forbes (emphasis ours)

The U.S. Supreme Court on Wednesday will hear oral argument in Caniglia v. Strom, a case that could have sweeping consequences for policing, due process, and mental health, with the Biden Administration and attorneys general from nine states urging the High Court to uphold warrantless gun confiscation. But what would ultimately become a major Fourth Amendment case began with an elderly couple's spat over a coffee mug.

In August 2015, 68-year-old Edward Caniglia joked to Kim, his wife of 22 years, that he didn't use a certain coffee mug after his brother-in-law had used it because he "might catch a case of dishonesty." That quip quickly spiraled into an hour-long argument. Growing exhausted from the bickering, Edward stormed into his bedroom, grabbed an unloaded handgun, and put it on the kitchen table in front of his wife. With a flair for the dramatic, he then asked: "Why don't you just shoot me and get me out of my misery?"

Perhaps unsurprisingly, the tactic backfired and the two continued to argue. Eventually, Edward took a drive to cool off. But when he returned, their argument flared up once again. This time, Kim decided to leave the house and spend the night at a motel. The next day, Kim phoned home. No answer.