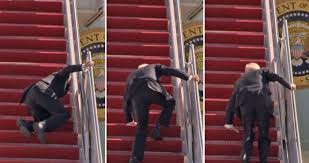 Ascending the stairs of Air Force One on Friday, to fly to Georgia, President Joe Biden slipped and stumbled. Getting up, he slipped again and then fell. The scene was jolting and disquieting.

Adversaries abroad will use it as a metaphor for the decline of the last superpower to emerge from the Cold War.

And while our major media may scoff at it, there is talk all over this town about what appears to be the visibly declining physical and mental capacity of this oldest of American presidents at 78.

Biden's press conference this coming Thursday — after the longest delay before a first full presidential press conference since Cal Coolidge — will be as closely monitored as Ronald Reagan's second debate in 1984, after he seemed to suffer a mental lapse in his first debate with Fritz Mondale.

But now, after his legislative triumph with the enactment of his $1.9 trillion American Rescue Plan, Joe Biden has some new problems, all of his own making.

The COVID-19 pandemic he inherited, as Nixon inherited Vietnam in 1969. But Biden and the nation were fortunate in that, by the time he took the oath, two vaccines had been approved and the shots were being given to Americans at a rate of a million doses a day.