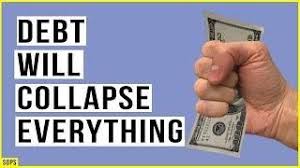 The economy runs on energy, far more than it operates on growing debt. Our energy problems don't appear to be fixable in the near term, such as six months or a year. Instead, the economy seems to be headed for a collapse of its debt bubble. Eventually, we may see a reset of the world financial system leading to fewer interchangeable currencies, far less international trade and falling production of goods and services. Some governments may collapse.

I think of debt as being a time-shifting device. Indirectly, it is a promise that the economy will be able to provide as many, or more, goods and services in the future compared to what it does at the time the loan is taken out.

Common sense suggests that it is much easier to repay debt with interest in a growing economy than in a shrinking economy. Carmen Reinhart and Ken Rogoff unexpectedly ran across this phenomenon in their 2008 working paper, This Time Is Different: A Panoramic View of Eight Centuries of Financial Crises. They reported (p. 15), "It is notable that the non-defaulters, by and large, are all hugely successful growth stories." In other words, their analysis of 800 years of governmental debt showed that default was almost inevitable if a country stopped growing or started shrinking.