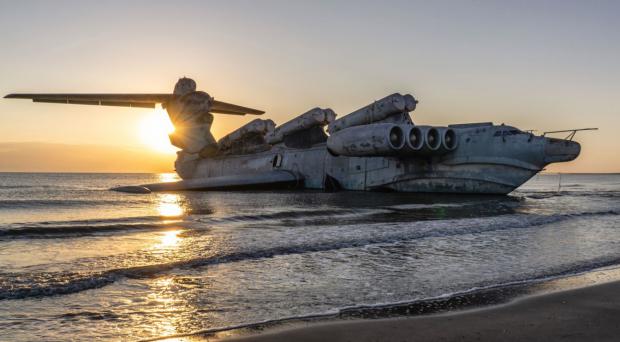 These stunning images reveal the inside of the secret Soviet-era flying machine which is set to become a tourist attraction in Dagestan, southern Russia.

The Lun-class ekranoplan, dubbed the 'Caspian Sea Monster', was discovered by the USA during the Cold War and dragged onto the beach in Derbent in July 2020.

The Lun-class ekranoplan, was an experimental ground effect vehicle which was developed by the Soviet Union in the 1960s.

It is classified as a ship by the International Maritime Organisation, but actually forms a distinct technological group.

The craft hovers between one and five metres above the surface of the water using the aerodynamic principle of 'ground effect'.

The vessel is able to move over water without touching it by gaining support from the reactions of the air against the surface of the water.

The machine began operating in the landlocked sea between Iran and the Soviet Union in 1966, earning its nickname as the 'Caspian Sea Monster'.

It was tested by the Soviet Navy until 1987, when it came into formal service.

Another version of the craft, mean to be an unarmed ammunition resupply ship, was under construction and nearly finished in the early 1990s.

However, the whole programme was then axed and the existing Lun-class ekranoplan withdrawn from service.