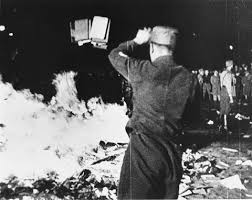 Why won't America stand up for herself? what would have put millions in the street noly a generation ago, barely holds our attention anymore. Why is the country, once a country which possessed courage and conviction , now sitting idly while allowing itself to be taken to the slaughter without so much as a whimper? Many psychoogists including myself, believe the reoot of answer is globalist-induced learned helplessness.

America has lost almost 60% of its small businesses with no end sight in the midst of lockdown procedures which did nothing to mitigate the spread of a virus.

Small businesses were assassinated by the government in favor of box store, campaign-giving box stores that experienced record profits.

The First Amendment is dead in America. Any political opposition is met with allegations of racism and the deplatforming and the loss of jobs happens to people who date question anything.

America has witnessed the biggest book burning exercise since the Nazis did it almost 90 years with social media censorship. Remember, where they burn books, they will soon burn people.

It is now considered racism to put America first above any globalism.

It is now considered racism to play chess with black and white pieces. Social media sites for chess are being banned for this reason.

It is now considered racism to support the Constitution.