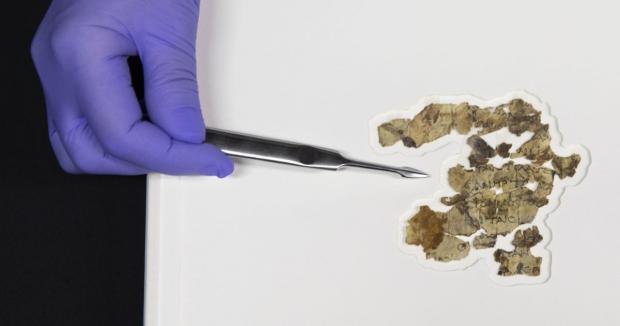 A 2,000-year-old biblical scroll has been unearthed in the Judean desert, the Israel Antiquities Authority announced Tuesday. The groundbreaking discovery marks the first time that such an artifact has been uncovered in decades, since the time of the Dead Sea Scrolls.

The two dozen fragments were found in a cave in the Judean Desert, as a result of a several-year-long breathtaking rescue operation with the purpose of surveying all the caves of the area, carried out by the IAA in cooperation with the Archaeology Department of the Civil Administration.

The scroll was written in Greek, but God's name appears in paleo-Hebrew. It contains passages from the Minor Prophets, including Nahum.

Besides the manuscript, the cave harbored several other unique findings, including a trove of coins from the time of the Bar Kochba Revolt, the skeleton of a child dating back to some 6,000 years, and a 10,000-year-old exceptionally well-preserved basket which experts say might be the earliest item of this kind ever uncovered.

"These are the things you are to do: Speak the truth to one another, render true and perfect justice in your gates. And do not contrive evil against one another, and do not love perjury, because all those are things that I hate – declares the Lord," one of the fragments reads, featuring an excerpt of the biblical book of Zechariah.

Most human origins stories are not compatible with known fossils