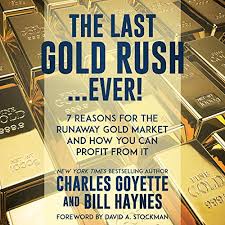 The book is much more than about gold. It's about the end of the US dollar in its present iteration, no matter what replaces the dollar.

My favorite chapters, and Goyette's too, are "The Crossroads of History" and "The Empire's End", how empires always collapse due to military expansion.

As Pat Buchanan critically observed in the heat of the Iraq war, in his book Day of Reckoning: "Between the alliance with France in the Revolutionary War in 1778 and the creation of NATO in 1949, the United States did not enter a formal alliance with any country. Yet we are now treaty-bound to defend 60 nations on five continents."

Seventy-five years after World War II ended, there remain 194 US base sites in Germany and 121 in Japan. In South Korea, more than two generations after the war, there are 83 US bases.