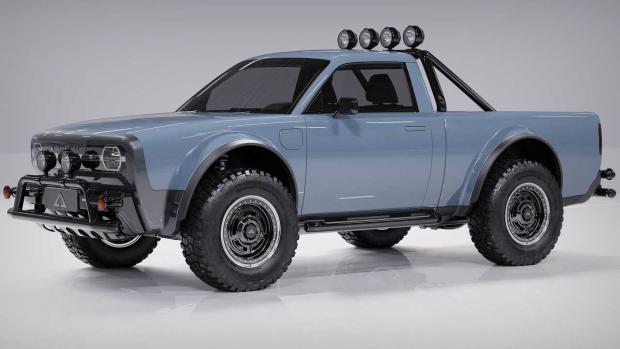 Alpha Motor Corporation, an EV start-up based in California, has revealed its Wolf electric pickup truck. This is the company's third EV, the Ace Coupe and Jax CUV have already been unveiled.

Unlike some of the upcoming electric trucks (GMC Hummer EV and Rivian R1T), this one won't empty your bank account. The Alpha Wolf electric truck starts at $36,000, and that's without any tax incentives. Although, this old-school looking electric truck is made for those who don't need more than two seats and enjoy venturing off the beaten path.

The Wolf comes in single motor, front-wheel drive, or dual-motor, all-wheel drive configurations. The electric automaker claims a driving range of 250 - 275 miles and a towing capacity of 3,000 pounds. Hauling capacity isn't advertised but the bed is about five and a half feet in length, which is about the same as most crew cab trucks — but there's also a front trunk (or frunk). The electric truck hits 60 mph in a brisk 6.2 seconds.

It seems Alpha hasn't settled on a battery pack size for the Wolf or doesn't want to disclose the exact size yet, but it will be between 75 and 85 kWh. Charging speed isn't stated, but the truck has a "rapid charger," as well as a battery cooling and heating system.

The Alpha Wolf has a nicely appointed interior with a digital instrument cluster, upscale-looking seats, a premium audio system, Bluetooth connectivity, and a large center touchscreen that looks similar to the Ford Mustang Mach-E's. There are four USB ports and a center console instead of a middle seat. The company says the interior is "designed for replaceability."