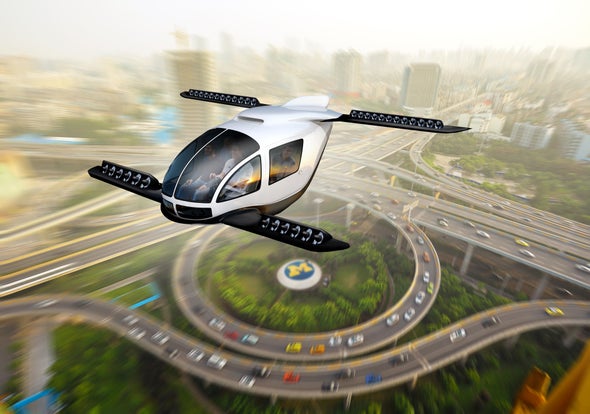 Hopes for the flying car soared in January, when one manufacturer, Woburn, Massachusetts-based Terrafugia, attained a long-awaited industry first: a Federal Aviation Authority airworthiness certificate for its Transition, a "roadable aircraft" — a winged, gas-powered, wheeled vehicle that can be both driven and flown. Suddenly the aerial sedan, first popularized in the 1960s cartoon The Jetsons, needed only U.S. Department of Transportation approval before it could be let loose on America's highways and flyways. Terrafugia hailed a "major accomplishment." Champagne corks flew.

But in mid-February, Terrafugia, which is owned by China's Zhejiang Geely Holding Group, quietly laid off 43 employees — almost half of its Massachusetts workforce. Kevin Colburn, vice president and general manager of Terrafugia, which was started in 2006 by MIT grads, says the company is now focused on a new endeavor that is "not in flying cars."

Terrafugia's plummet to Earth should come as little surprise. The roadable aircraft has been on a wobbly trajectory since its inception in 1917, when an enterprising motorcycle builder, Glenn Curtiss, slapped some wings on what resembled a Model T and made an attempt, alas bootless, to take flight. For more than a century, the mass-produced flying car has been an American miracle earnestly promised to hit the market in months. In recent years, hundreds of well-heeled futurists have made reservations to buy a $300,000-plus flying car from Terrafugia and have inked similar orders from its two largest competitors, Samson Sky of Oregon and Pal-V of the Netherlands.