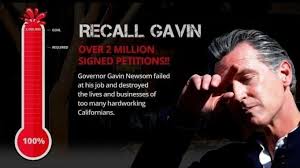 Petition organizers announced on Thursday that, as of Wednesday evening, the movement to pull the Golden State governor from his post had garnered over 2,060,000 signatures.

Chairman of the California Patriot Coalition's RecallGavin2020 Committee Orrin Heatlie said that Californians "are speaking loud and clear" through the popular petition and declared the winds of change were coming to California politics.

"We have cleared another milestone," said Heatlie. "Politics as usual in California are over as we know it to be."

The California Patriot Coalition/RecallGavin2020 is the group spearheading the Newsom recall efforts.